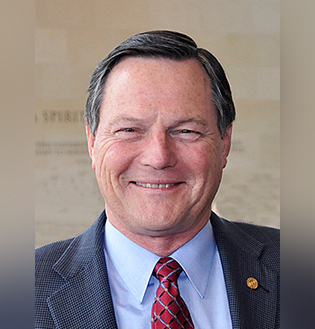 Van Taylor received his Bachelor’s Degree in Mechanical Engineering from Texas A&M and his Masters of Business Administration from Southern Methodist University. As a cadet, Taylor was on Corps Staff as both Sergeant Major and Corps Commander and he was a member of Company F-1, the Ross Volunteers, Who’s Who, Town Hall, SCONA and the Student Engineer Council. In 1971, he was the first recipient of the Earl Rudder Memorial Outstanding Student Award established by the Brown Foundation.

Commissioned into the U.S. Army, he served on active duty for a training tour and fulfilled his commitment as an officer in the Army Reserve. Taylor’s telecommunications career spanned more than 34 years including operations and engineering assignments throughout Texas, Kansas, Missouri and New Jersey. He served as President and CEO of SBC’s research organization, Technology Resources, Inc. and as President of Network Services for the Southwest Region of AT&T.

Taylor was a member of the Texas A&M Research and Infrastructure Committee for Vision 2020, and served as chairman of the Association of Former Students in 2006. He currently serves on the Dwight Look College of Engineering Advisory Council, and on the Board of Trustees of the A&M Foundation. Taylor is a past President of the Arlington A&M Club, as well as a former Muster Chairman for the St. Louis A&M Club. He was honored as a Fish Camp namesake in 2007.

Taylor and his wife, Carole, have established both a President’s Endowed Scholarship and a General Rudder Corps scholarship along with being endowed Century Club donors to the Association of Former Students. They have contributed to the MSC Renovation project and are supporters of Aggie Athletics and members of the 12th Man Ambassador Council. They are proud parents of four daughters who include two Aggies, a teasip and a Tulane Green Wave.