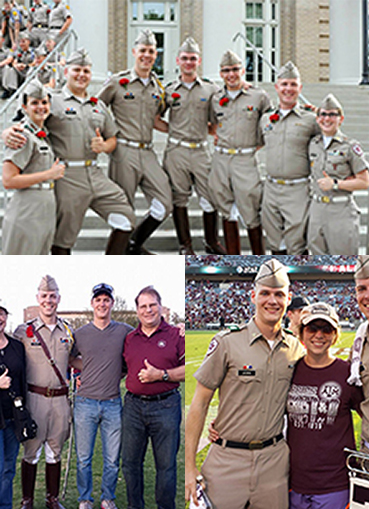 Michael Jaska ’14 is a Mechanical Engineering major from Katy, Texas and the son of Matthew ’82 and Gretchen Jaska ’84. His three siblings have been members of or are current members of the Corps – Pamela ’10, Paul ’11 and Robert ’16. Michael served as the Executive Officer of First Brigade for the 2013 – 2014 school year.

Active within the Corps, Michael was a member of the Ross Volunteers, serving as their Administrative Officer. A member of the Fightin’ Texas Aggie Band, he has served in several positions including Bugle Rank Captain, B-Battery First Sergeant, C-Battery 1st Platoon Leader and Deputy Corps Bugler.

Outside of the Corps, Michael has been heavily involved for four years in the American Society of Mechanical Engineers, serving in various positions including Treasurer, Events Chair, and Webmaster. He also served on the Society and Graduate Relations Committee of the Student Engineer’s Council – the representative body for all students in the Dwight Look College of Engineering representing the concerns of engineering students and professional societies to the college and university administration.

Michael has completed several internships focused in the oil & gas industry and will intern for Chevron this summer in the Pittsburgh area in their Drilling & Completions (D&C) Engineering department.

After graduation in December 2014, Michael plans to work for Chevron in either D&C or Facilities Engineering.

Michael has had an exceptional experience in the Corps and has proven his superior leadership abilities in many facets and situations. He is actively involved in many aspects of university life and has had a well-rounded experience both in the Corps and on campus. Michael’s drive, determination, and leadership abilities have led him to a very successful college career, and will no doubt lead him to great success in all of his future endeavors. He is a leader, mentor, and role model, and I know that he will go onto great success in the future, both professionally and personally. He is truly one of our very best!