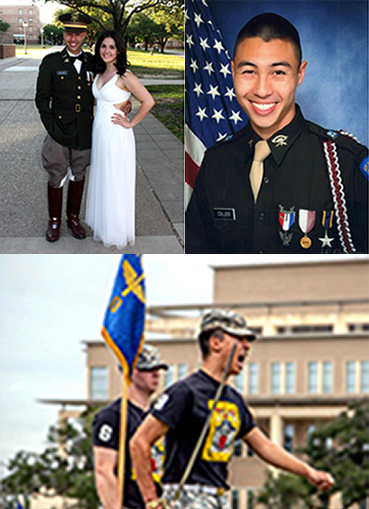 Michael Collier ’15 is a Biomedical Science major with a minor in History from San Antonio, Texas, and is the son of Kim and Philip Collier. A first generation Aggie, he is serving as the Commander of Squadron 8 for the 2014 – 2015 school year.

Active within the Corps, Michael is a member of the O.R. Simpson Honor Society. He served as the Training Corporal and First Sergeant of Squadron 8 his sophomore and junior years, respectively. Michael was also selected as the Most Outstanding Drill & Ceremonies Junior Cadet in the 2nd Wing last year.

Upon his graduation in May 2015, Michael plans to apply to medical school and hopes to become an Orthopedic Surgeon or Emergency Room Physician.

Michael is a superb leader and scholar who has shown that he can successfully balance his academic requirements with his leadership responsibilities, as he strives toward his goal of becoming a physician and surgeon. He has excelled as a leader in the Corps and in the classroom, and is recognized as a professional in all that he does. His volunteer work with the Corazon Clinic and with TAMECT just highlights his sense of selfless service and dedication to helping others. Michael is an exemplary student and cadet, and will no doubt become an exceptional doctor who will serve others in many significant ways in the future.