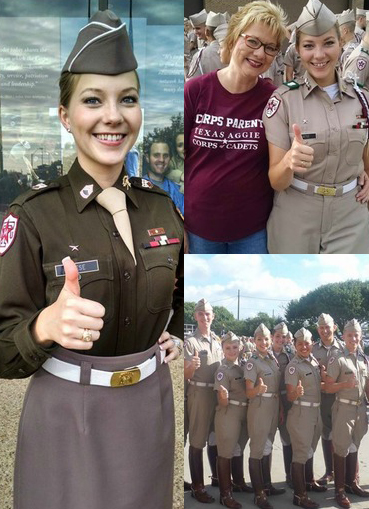 Melodie Ann Raese ’17 is an Animal Science major from Murrieta, California.  She is the daughter of Jane and Joachim Raese.  She is a member of Company A-1 where she serves as a Platoon Leader and Scholastics Officer.  Melodie is also  serving as the Operations Officer for the sophomore class within the Army ROTC Warrior Battalion.

Off the Quad, Melodie is an active member of the College of Agriculture and Life Sciences Student Council, and currently serves on the Leadership Committee.  She has studied abroad with the Department of Animal Science in England and Ireland, focusing on international production methods.  Melodie is an “Aggie Research Scholar” and has worked on a research project with members the Veterinary School regarding chronic inflammation in the Gastro-Intestinal tract of dogs.  Melodie has a part time job as a Veterinary Technician in Caldwell, Texas.  She has been on the Dean’s List twice (December 2013, May 2016) and was a Distinguished Student for the College of Agriculture in December 2014.

Melodie will graduate in May of 2017 as a Distinguished Military Graduate.  She has received an educational delay from the Army for Veterinary Studies after her graduation from Texas A&M. After graduation, she aspires to serve in the Army in the Veterinary Corps, and work with military working dogs.  After her military service, Melodie plans to do research in canine neurology.

Melodie is a dedicated leader who has a thirst for success and is dedicated to achieving the many goals she has set for herself. She has a bright future ahead of her, and is going to make an impact at whatever she does. I am confident that she will make a superb Army Veterinarian and will represent herself and Texas A&M extremely well as an Army officer. I look forward to seeing what her future holds, I know she accomplish great things!