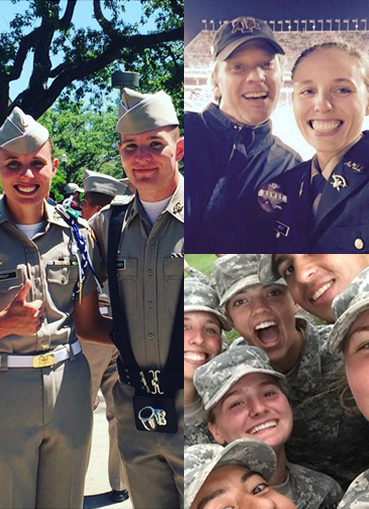 Megan is a member of O.R. Simpson Honor Society and says being a part of it has not only been a rewarding experience, but has helped her achieve her academic goals. She has been able to peer mentor and tutor with the O.R. Simpson Honor Society, something she says she will treasure forever.  She is also a member of the Parson’s Mounted Cavalry and says her favorite memories so far have been working out at the Fiddler’s Green, home of the PMC, with the other members of the PMC. Megan was awarded the Distinguished Student Award last year, given to cadets with a 3.5 or higher GPA.

Off the quad, Megan participates as an alumnus in her local FFA program in Katy to help students learn and understand the importance of agriculture in the modern world, and advises students on raising their livestock projects. She has a strong passion for agriculture and enjoys being able to work with her former high school.

Megan will graduate in May, 2018 and plans to commission in the U.S. Army as a 2nd Lieutenant in Military Intelligence to combat terrorism on a global scale.

Megan is a superb leader and role model in the Corps, and is well on her way to becoming a leader in our military. She is an outstanding cadet who works hard to help her fellow cadets successful, both academically and within the Corps. We are all very proud of Megan, and look forward to seeing her achieve greater success in the Corps and in her future career as a US Army officer.