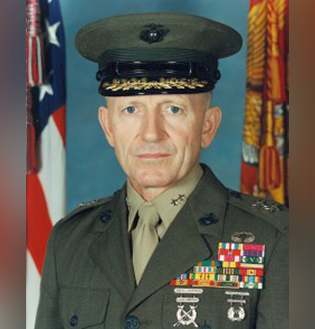 He served a distinguished 31 year career in the U. S. Marine Corps, retiring as a Major General. General Hopgood served multiple tours of duty in Vietnam as a Rifle Platoon Leader and as a Company Commander for three Infantry Companies. His General Officer assignments included serving as Deputy Director for Operations at the National Military Command Center in the Pentagon; Assistant Division Commander of the 1st Marine Division; Commanding General of the First Services Support Group in Somalia; Director of Operations for the U. S. Pacific Command in Hawaii; and, President of the Marine Corps University.

In August 1996, General Hopgood became the 37th Commandant of the Corps of Cadets serving until June 2002. While a cadet at Texas A&M, he served for two years as Yell Leader and as a Ross Volunteer. He currently supports the Corps of Cadets with two Sul Ross Scholarships.