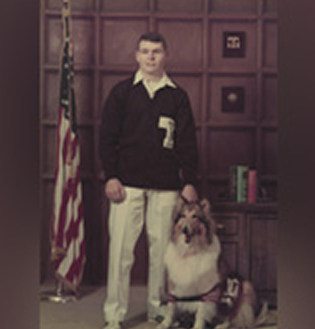 Major General Gerald R. “Jake” Betty graduated with a degree in Agricultural Economics in 1973 and earned his master’s in Educational Administration in 1995. Jake served as Mascot Corporal for Reveille III, and was a Ross Volunteer and Yell Leader.

He was commissioned as an Infantry Second Lieutenant in 1973. Upon leaving active duty in 1976, he returned to Texas A&M, working as a Staff Assistant on the Commandant’s staff. Betty moved to Lubbock in 1978 to work in residential construction and real estate. He returned to Texas A&M in 1988 and held positions as a Cadet Training Officer, Assistant Commandant for Recruiting, and finally Deputy Commandant and Chief of Staff.

Major General Betty retired from the United States Army Reserves with 30 years of combined Active and Reserve service in 2003 and from the Office of the Commandant and Texas A&M University in August 2012.