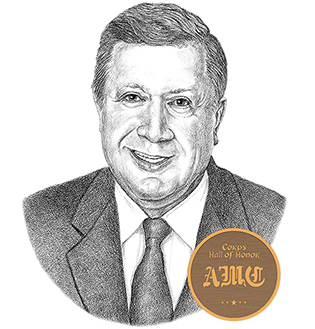 Lupe Fraga attended Texas A&M on a baseball scholarship, was a member of A Athletics, and earned his Bachelor of Business Administration in 1957. Fraga received the T.W. Mohle Accounting Award by the A&M Faculty. He joined the Army, spent three years in France, earned the rank of First Lieutenant, and was honorably discharged. Fraga returned to Houston in the 1960s and purchased Tejas Office Products Inc. Fraga remained loyal to A&M, donating an endowed scholarship for underserved students at the Mays Business School, where, in 2003, he was named Outstanding Alumnus. Governor Rick Perry ’72 appointed him as a Texas A&M University System Regent in May 2005. Fraga w as Chairman of the Board of the Federal Reserve Bank Houston. He was awarded Businessman of the Year by the Houston Hispanic Chamber of Commerce and inducted into the St. Thomas High School Hall of Honor. Fraga has won the Aggie 100 Award and has been a Top 500 Hispanic Owned Business since its inception. Fraga has been a longtime member of the Texas Aggie Corps of Cadets Association.