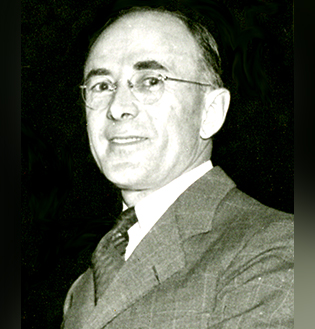 Lieutenant George Jouine received his bachelor’s degree in civil engineering from the Agricultural and Mechanical College of Texas. As a cadet he was active in a number of student organizations including treasurer of the senior class, a member of the Student Council, a Ross Volunteer and was recognized in his junior and senior years for his outstanding military bearing.

Following graduation, Jouine worked with a number of engineering firms and joined the U.S. Corps of Engineers to work as a surveyor on levee construction on the Mississippi River.

With the outbreak of war in Europe in 1914, he departed to join the French Army as a private and was soon commissioned as an artillery officer. For over 34 months he commanded a trench mortar company and in near constant action through 1916, Officer Jouine was wounded four times and awarded the French Legion of Honor— the highest award given by the French Republic for outstanding service to France, regardless of the social status or the nationality of the recipients.

Upon his recovery, he was transferred to command one of the first mobile tank units in modern warfare. His leadership, active role in the development of new tank tactics and action at the front over the balance of the war resulted in additional wounds and decorations—in all he received 14 decorations from the France, England, Belgium and the United States.

After the war, Jouine returned to work in the engineering profession, becoming president of the Gladys City Oil Company of Beaumont and serving for 17 years as the official French Consul in Houston.

Prior to his death, he donated his extensive engineering library to Texas A&M and established one of the earliest endowment funds to provide scholarships for cadets.

In recognition of Consul Jouine’s service and his achievements as a successful post-war engineer, since 1958, the year following his death, the Corps of Cadets has annually designated the most outstanding scholastic cadet unit as the “Jouine unit”.