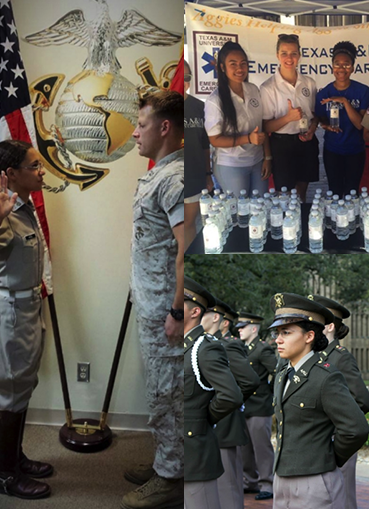 Katie Hass ’16 is a Kinesiology major from Shalimar, Florida. She is the daughter of Col. (Ret.) Michael Hass and Lt. Col (Ret.) Pamela Stafford ’84. She currently serves as the Squadron 6 Athletics and Recruiting officer.

Katie is very involved on the Quad and is currently the Air Force ROTC Special Tactics Squadron Executive Officer and Logistics Officer. She also serves as the Parsons Mounted Cavalry Vet Officer. As a sophomore she was a member of the 3rd Wing Color Guard.

Outside of the Corps Katie is the Public Relations Officer for the Texas A&M Emergency Care Team, is a former member of Aggie Women in Leadership and a 2016 Southern Black Student Leadership Conference candidate. She says the leadership that she learned in the Corps has helped her to become a leader in other settings.

Katie will graduate in December 2016 and plans to commission in the United States Marine Corps. After her military service she plans to apply for graduate school and find a job in the healthcare industry working with student athletes.

Katie is an exceptional leader and role model who has excelled in all that she has done in the Corps. She has proven that hard work and determination do pay off and has taken that attitude into her performance as an outstanding cadet. I am confident that she will take the leadership skills she has learned in the Corps into her leadership duties in the Marine Corps. We wish her the best of luck and look forward to seeing her achieve great success in the future.