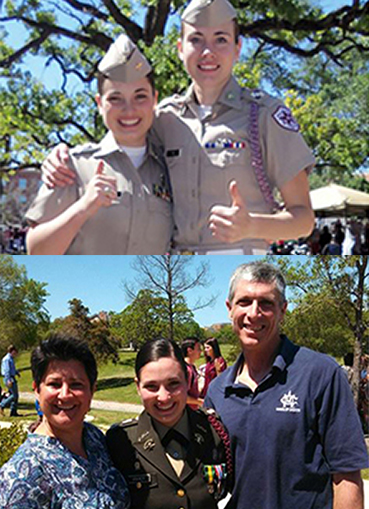 Kathleen Crocket ’14 is a History major with a minor in Military Studies with a focus on American Sign Language from Frederick, Maryland and is the daughter of Nan and Dennis Crockett. Kathleen will serve as Chaplain and Judge Advocate General (JAG) and Inspector General (IG) for Company F-1 for the 2013 – 2014 year.

Active within the Corps of Cadets, Kathleen was originally in Squadron 16, but switched to Company F-1 upon its reactivation in 2012. She serves as the Corps Color Guard Executive Officer culminating her experience as a rifle bearer, flag bearer, 2nd Regiment Color Sergeant and Flag Training Sergeant. Kathleen is a member of the Aggie Eagle Post, the Darling Recruiting Company and serves as a Commander in the Arnold Air Society.

Outside the Corps, she is a member of the Aggie Experience Council providing campus tours and serves as a Division of Marketing and Communications Intern at the Appelt Aggieland Visitor Center.

Extremely active in Civil Air Patrol (CAP) since 2006, to include traveling to Singapore as part of the International Air Cadet Exchange program, Kathleen commanded the 2013 Tri-Wing Encampment and was named the 2012 Maryland Wing Cadet of the Year. She also attended the National Cadet Leadership Symposium at the United States Air Force Academy representing Texas A&M and CAP this past February.

Kathleen will graduate in May 2014 and commission into the United States Air Force with a goal of working in personnel/manpower. Her dream job is to become a General’s aide at the Pentagon.

I am very proud of Kathleen and all of her accomplishments. She is a proud representative of a large number of out-of-state cadets we have in the Corps who come to Texas A&M and excel both personally and professionally. She is a superb student and cadet, and I have no doubt that both will serve her well in her future endeavors in the Air Force. Kathleen is active in the Corps and across campus, as well as in the community, and she makes an impact in all that she does. She is going to be an exceptional leader in our Air Force, and is going to make significant contributions wherever she goes. Best wishes to Kathleen in all of her future endeavors! She is going to make all of us very proud!