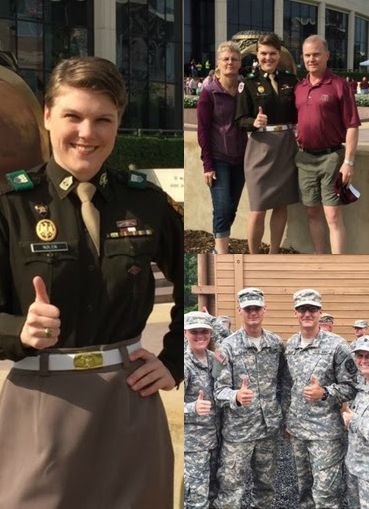 Katheryn Nolen ’17 from Kingwood, Texas, is a Psychology major with a minor in Neuroscience. She is the daughter of Derek and Jackie Nolen. Katheryn is a senior on the 2nd Brigade Staff where she serves as the Inspector General and Discipline Officer. She is the Army ROTC program MS1 Commander, and also works with Corps Recruiting.

Katheryn spent part of her summer attending Army ROTC Advanced Camp at Ft Knox, Kentucky, and also completed the Army’s Air Assault Course. Katheryn recently traveled with the Ranger Challenge team for the Spartan Brigade Ranger Challenge competition. She has been a member of the Ranger Challenge team and Rudder’s Rangers for three years. In the summer of 2015 Katheryn traveled to Macedonia on an Army ROTC sponsored Cultural Understanding and Leadership Program (CULP) where she participated in many different events, to include Habitat for Humanity, and a multinational NATO training event.

After graduation, Katheryn will commission as an officer in the US Army. Her long term goal is to be a psychologist, specifically working with members of the military and their families. She is an outstanding cadet who has excelled in all that she has done during her time in the Corps of Cadets. She is a leader, a motivator, and a tireless worker who strives to be the best at all that she does. I am proud of all that she has achieved in the Corps of Cadets, and know that she will go on to great success as an officer in the US Army. We wish her the very best in all of her future endeavors!