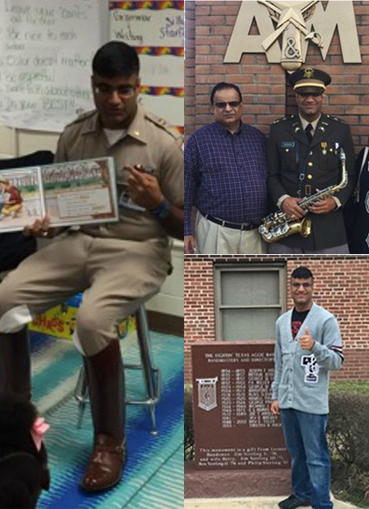 Karim Hussain ‘17 is a Technology Management major with a Business Administration minor from Teague, Texas. He is the son of Saleen and Rozina Hussain.

Karim is a member of B-Company in the Fightin’ Texas Aggie Band. As a sophomore, he was a B-Company Fire Team Leader, and was the Infantry Band Operations Sergeant during his junior year. This year Karim is the B-Company Career Readiness Officer. He also holds the position of Alto Sax Section Officer in the Aggie Band. In addition to his band responsibilities, Karim serves as the Public Relations/Community Service Officer for the Corps’ Cultural Awareness and Diversity Expansion Team (C.A.D.E.T.).

Off the Quad, Hussain is involved with Aggies for Christ, a college church organization through the A&M Church of Christ. He was a fish camp counselor his sophomore year, and participated in a children’s ministry with the community bible study, Bryan ASK, in the fall of 2016.

Karim was on the Spring 2016 College of Education and Human Resource Development Dean’s List, and received the Distinguished Student award that semester. Karim has a desire to help others, and develop them into being the best they can be. He values the relationships he has made through the Corps and the A&M Church of Christ. Karim will graduate in May of 2018 and hopes to work in the IT field before returning to college to obtain a master’s degree in Management Information Systems. Karim is an outstanding cadet with an extremely bright future. His dedication shows through with everything he does, and I am thankful to have young men and women like him in the Corps of Cadets. I have no doubt he will go on to great success in the future!