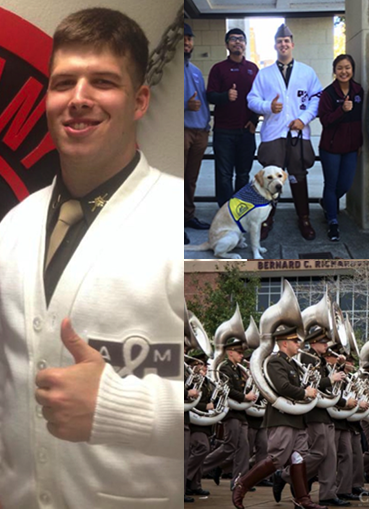 Justin Duncan ’16 is from Richland Hills, Texas and in B-company in the Aggie Band. He is a History major with a psychology minor.

Justin served as the Personnel/Operations Corporal of his unit his sophomore year and as the Public Relations Sergeant and Inspector General Sergeant, his junior year. This year Justin serves as the Operations/Logistics Officer for the outfit, where he plans and acquires necessary equipment for training, handles outfit funds and plans events.

Within the Corps, Justin is a member of the Bass Rank of the Fightin’ Texas Aggie Band, and is involved in the Aggie Eagle Post, a unit comprised of Eagle Scouts and Girl Scout Gold award recipients who seek to recruit those with common interests to join the Corps.

Outside the Corps, Justin is involved in Student Bonfire, and works part time as a Peer Recruiter in the Office of Admissions, giving campus tours and hosting events for high schools and prospective students.

For the past two summers Justin has worked for the Boy Scouts of America at Philmont High Adventure Base in New Mexico. At the camp Justin teaches Scouts about history and the outdoors, as well as technical skills such as shooting and blacksmithing. He also loves playing his banjo and guitar.

After graduation in December 2016 Justin plans on pursuing a career in public service, either law enforcement or emergency response. With his leadership skills and proven selfless service I know Justin will continue to reach every goal he sets for himself. He is a great cadet and I look forward to seeing him achieve great things.