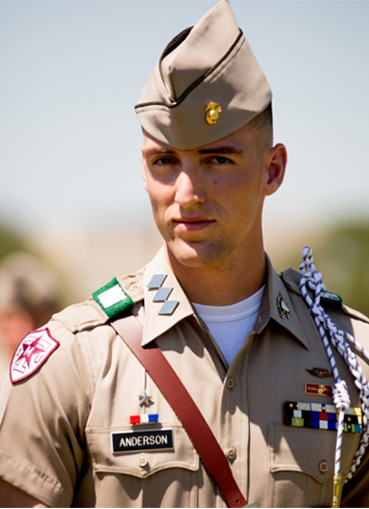 Jordan Anderson ‘18 is a Geographical Information Science and Technology major with a minor in Military Sciences. He is the son of Steve and Julie Anderson and calls Fredericksburg, Texas home.

Jordan served as a Fire Team Leader, Training Corporal, and Squad Leader for his home outfit, Company F-1 (the Finest First).  During his junior year he was the 2nd Regiment Sergeant Major, and is currently serving as the 2017-2018 2nd Regiment Commander.

On the Quad, Jordan is a member of the O.R. Simpson Honor Society and is a Corps of Cadets Distinguished Student. He is a member of the Corps of Cadets Marksmanship Unit where he competes against service academies and other senior military colleges.  Jordan is also a member of the Texas A&M Recon Company, and is an Assistant Squad Leader for the Ross Volunteer Company.  In May of 2016, Jordan traveled to Israel for 10 days on a Corps of Cadets International Excursion.  Off the Quad, Jordan has participated in the Nichols’ Rising Leader Conference and has served as a committee member for the Student Conference on National Affairs.

Jordan has excelled as a member of the Navy ROTC program.  In January of 2016, he received a Marine Corps Scholarship and completed Marine Corps’ Officer Candidate School last summer, finishing in the top 6%.

Upon graduation in May of 2018, Jordan will commission as a 2nd Lieutenant in the United States Marine Corps.