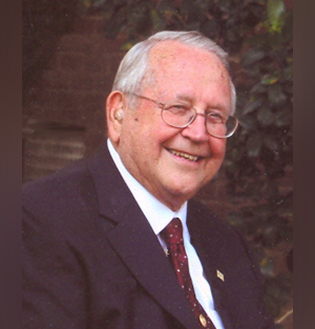 James Nelson received dual bachelor’s degrees in mechanical and petroleum engineering from Texas A&M. While a cadet, Nelson was a Ross Volunteer, a Cadet Lt. Colonel Corps Staff, senior class secretary and treasurer and editor of The Battalion. He received a commission as a second lieutenant in the United States Air Force upon graduation.

In 1960, Nelson began his tenure with Grey Wolf Drilling Company, also in Houston, first as vice president of operations and then as president and chief executive officer from 1979 until 1997.

Presently, Nelson is president of Felicity Ventures, Ltd. and serves on the Board of Directors of Grey Wolf Drilling, and is president, treasurer and trustee of the James K.B. and Audrey Calais Nelson Foundation.

In 1997, Nelson received the Entrepreneur of the Year Award in Houston, was a 1997 inductee into the Texas A&M Petroleum Engineering Academy of Distinguished Graduates and was additionally honored as both an Outstanding Alumni of the Dwight Look College of Engineering in 2000 and a Texas A&M University and The Association of Former Students Distinguished Alumnus in 2005.