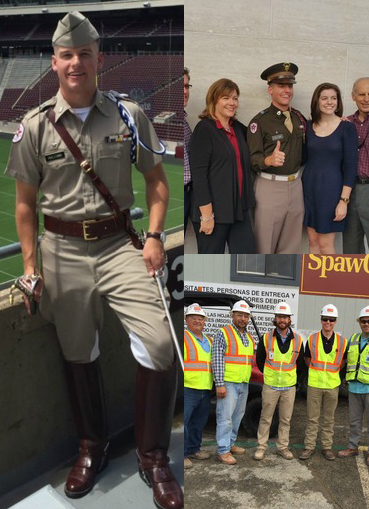 Reed Holcomb ’17 is a Construction Science major with a Business Administration minor from Fort Worth, Texas.  He is the son of James and Paula Holcomb, and the brother of Rachel Holcomb ’15.  He is currently in his second year on the 2nd Wing Staff serving as the Recruiting and Public Relations Officer.

Reed started his fish year in 2013 in SQ-16, and was the Logistics/Operations Sergeant his sophomore year.  He was a member of a Freshman Leadership Organization and is a member of the O.R. Simpson Society.

He has earned many academic awards and scholarships in his 4 years as a cadet, such as the TAMU Presidential Achievement Scholarship (all 4 years), Corps of Cadets General Rudder Scholarship, and a Construction Sciences Scholarship.  J. Reed has also received academic silver stars for 4 semesters.

Reed interned for SpawGlass Construction in Dallas/Fort Worth from January to May 2016.  He gained an incredible amount of knowledge regarding the construction industry, and the leadership involved in producing multi-million dollar projects in a very short period of time.  He spent this past summer interning for Muckleroy & Falls Construction, a smaller firm in Fort Worth.  J. Reed has already received job offers for full-time positions after graduation.

J. Reed has a goal to finish out this year with a GPA above 3.75, a retention rate of >90% for the 2nd Wing, and positive public relations for the 2nd Wing through charitable work.  He plans to put the skills he obtained from Texas A&M University, and the Corps of Cadets to work by having a positive impact in his community.  J. Reed is a dedicated cadet with an ambition that will serve him well in the future.  It is an honor to know him, and I look forward to seeing where life takes him.