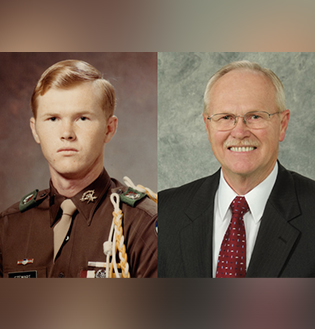 Malcolm Stewart received his Bachelor’s Degree in Building Construction from Texas A&M. As a cadet, Stewart served as both First Sergeant and Commander of Company G-1, was a member of the Ross Volunteers, and was a Distinguished Military Graduate.

Upon graduation, Stewart received a regular Army commission as a Combat Engineer and served three years as an Army Officer in various assignments before transitioning into the private sector.

Stewart is Chief Operating Officer of Camden Property Trust, a multibillion dollar public real estate organization based in Houston, Texas. Throughout his career, Stewart created successful real estate business units including privatized public development of research, medical, governmental, and university facilities. At Camden he structured numerous real estate service entities and has been responsible for the construction, development, and operations of multifamily real estate assets throughout the United States.

Stewart supports numerous civic and community programs as well as veteran organizations. He has been a guest lecturer for the Texas A&M Master of Real Estate program, is a member of that Executive Committee, has served on the Corps Development Council, was recently the keynote speaker for the Ross Volunteer induction ceremony, and supports Cadet scholarships.