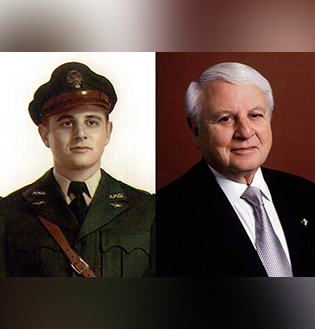 Gerald Ray received his Bachelor’s Degree in Finance from Texas A&M and MBA from The Wharton School of Finance, University of Pennsylvania. As a Cadet, Ray was a member of Squadron 5 and the Business Society. After graduation, Ray served as a pilot in the United States Air Force and the Reserves.

Ray and his wife, Helaine, have a long history of supporting Texas A&M and the Corps of Cadets’ academics and leadership programs. They have endowed the Gerald L. Ray ’54 Pillars of A&M, a Corps 21 Scholarship, a Foundation Excellence Award for Cadets studying in Mays Business School, the Zachary L. Davis ’08 Special Achievement Award, the Robert M. Gates Outfit Award for Public Service, and the Kupfer Distinguished Executive Award. He has been a major contributor to the Aggies on Wall Street Program. In honoring their parents, the Rays established the Abe and Harriett Stein Sul Ross Scholarship and endowed the Elizabeth and Joseph Ray Auditorium in the Mays Business School. The Rays were co-underwriters for the Buzbee Leadership Learning Center lobby.

Ray was honored by being named a Mays Outstanding Alumnus in 1997 and The Association of Former Students Distinguished Alumnus in 2011.