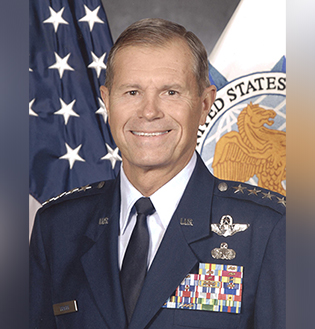 General Fraser received his Bachelor’s Degree in Engineering Technology from Texas A&M in 1974 and his Master of Science Degree in Management Information Systems from the University of Northern Colorado, Greeley in 1980. As a cadet, Fraser was the Commanding Officer of Squadron 10 and a member of the Fish Drill Team. As a distinguished graduate of the Texas A&M University Air Force ROTC program, General Fraser was commissioned into the Air Force in 1974. He is a command pilot with over 4,300 hours in the T-38, T-1, KC-135R, C-21, C-37 and operational assignments in the T-37, B-52, B-1, and B-2 as an instructor pilot and evaluator. General Fraser has commanded an operations group, two bomb wings and a major command. His staff duties include tours on the Air Staff, Joint Staff, and Joint Strategic Target Planning Staff at Offutt Air Force Base, Nebraska. He has also served as chief of staff for U.S. Strategic Command, as the Assistant to the Chairman of the Joint Chiefs of Staff and the 34th Vice Chief of Staff, Headquarters U.S. Air Force, Washington, D.C.

General Fraser was previously the Commander, Air Combat Command, Langley Air Force Base, Va., and Air Component Commander for U.S. Joint Forces Command. General Fraser currently serves as Commander, U.S. Transportation Command, Scott Air Force Base, Il. USTRANSCOM is the single manager for global air, land and sea transportation for the Department of Defense, is one of the seven combatant commands and he reports directly to the Secretary of Defense.