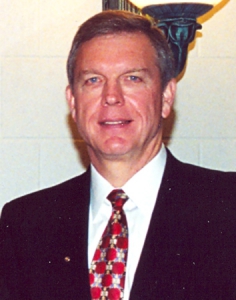 General Gamble received his Bachelor of Science degree in mathematics from Texas A&M. After graduation, he began an illustrious Air Force career that spanned 34 years. General Gamble rose to four-star rank, becoming one of only a handful of Aggie officers to do so.

After pilot training, he first served as a forward air controller in Vietnam, flying 394 combat missions in the
O-1 “Bird Dog” observation aircraft. He served as Director of Personnel Plans and Systems at Tactical Air Command headquarters, Air Force Deputy Chief of Staff for Air and Space Operations, and Commandant of Cadets at the U.S. Air Force Academy.

Following his retirement from active duty in 2001, he continued to make use of his vast organizational leadership talents and expertise as President and CEO of the Alaska Railroad.