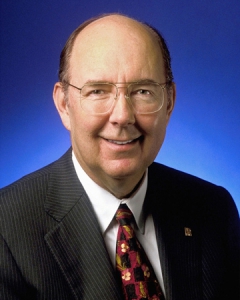 Erle A. Nye received a bachelor’s degree in electrical engineering from Texas A&M University in 1959, a juris doctorate from Southern Methodist University in 1965 and a doctorate of science honoris causa from the Baylor College of Dentistry in 1996.

During his time as a Texas A&M student, Nye was a member of the Corps of Cadets and was a Distinguished Military Graduate. Nye began his career in 1960 with Dallas Power & Light Company, a subsidiary of Texas Utilities Company. In 1980, he was named Vice President of the parent company where his career would span 45 years and he would lead seven companies under TXU Corp., Texas’ largest publicly-held utility company.

In 2004, he retired as Chief Executive Officer and now serves as Chairman Emeritus of TXU Corp. During his long and distinguished career, Nye chaired many industry organizations, including the Edison Electric Institute, the Electric Power Research Institute, the North American Electric Reliability Council and the Nuclear Energy Institute. He has served on numerous state and federal boards and committees and currently serves as Chairman of the President’s Critical Infrastructure Advisory Council.

He has been recognized with numerous honors, including The Nasher Award from the Dallas Business Committee for the Arts, the Robert H. Dedman Award for Ethics and Law from the Southern Methodist University Dedman School of Law and Texas General Counsel Forum, and the Corporate Social Responsibility Award from the Mexican American Legal Defense and Educational Fund.

As a former student, Nye has generously served Texas A&M with his time and talent. He is a former chariman of the Texas A&M University System Board of Regents. Nye is also a member of the Chancellor’s Century Council, the Dwight Look College of Engineering Development Council, the One Spirit One Vision Campaign Executive Committee and the Texas A&M Foundation Development Advisory Committee. In 1993, he received the Outstanding Alumni Honor Award from the Dwight Look College of Engineering.