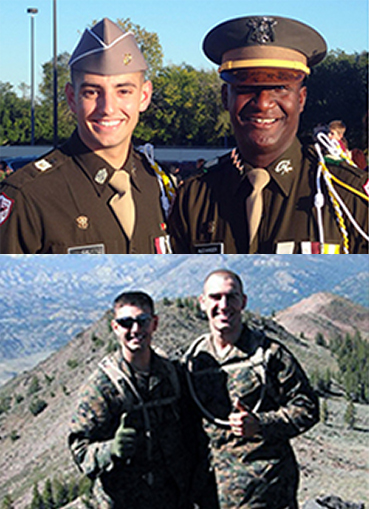 Eric Gil ’14 is an Industrial Distribution major from Poway, California and is the son of Dositeo and Karen Gil and is the stepson of Martin Shaunessy and Maria Molfino. He is the Corps Sergeant Major.

Active within the Corps, Eric is a member of the Ross Volunteer Company, the Nichols Rising Leadership Conference Operations and Logistics Staff, and traveled to South Korea as part of the Corps Excursion in the summer of 2012. He is also a member of the Corps men’s Basketball Team and was selected as the Corps Commander for the 2013-2014 school year.

Outside of the Corps, Eric is a member of the Texas A&M Foundation Maroon Coats, MSC Hospitality Committee, and the Professional Association for Industrial Distribution. He also served as a Fish Camp counselor in the summers of 2011 and 2012.

Eric was recently selected for the Buck Weirus Spirit Award and the prestigious Who’s Who Among American Colleges and Universities at Texas A&M. A Navy ROTC scholarship midshipman, Eric will graduate and commission in December of 2014 into the United States Marine Corps and aspires to become a Marine Corps aviator.

Eric is a superb young man and will do a great job leading the Corps of Cadets next year. His tenure in the Corps as the Corps Sergeant Major has been impressive and his transition to the Corps Commander will be a natural fit. Congratulations to Eric. I look forward to working with him next year and know he will go on to great success in the United States Marine Corps!