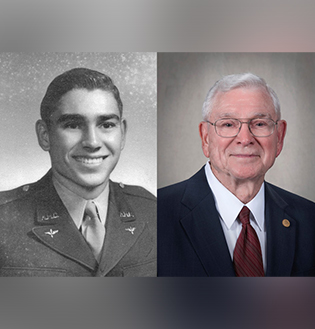 Dr. Joe West received his Doctor of Veterinary Medicine from Texas A&M, an MS in Radiation Biology from the University of Rochester, NY and the PhD in Comparative Pathology from UC Davis, California. Dr. West was a member of Squadrons 8 and “I” Air Force, Fish Baseball team and a Senior Yell Leader.

Dr. West attained the rank of Colonel during his 22-year Air Force career in veterinary public health and radiation biology, at one point serving as Consultant to the Air Force Surgeon General. His Air Force honors include the Air Force Commendation Medal, Meritorious Medal with Oak Leaf Cluster and the Legion of Merit.

Dr. West received an Association of Former Students and TAMU Distinguished Alumnus Award in 2011 and an Outstanding Alumnus Award from the TAMU College of Veterinary Medicine in 2001. The West’s cared for A&M Mascot Reveille V after her retirement. He is a Past President of the Association of Former Yell Leaders, was a Faculty Advisor to the Corps of Cadets, and Keynote Speaker for the 2001 Campus Muster.