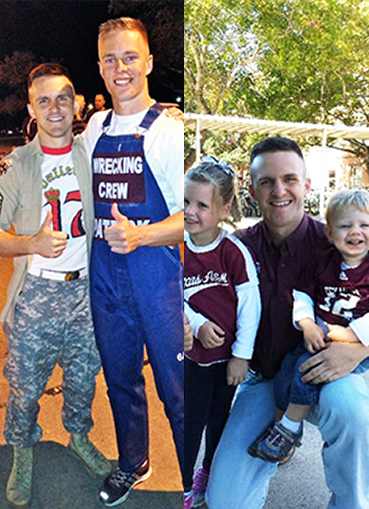 David Trigg ’15 is a Business Honors and Finance major who was born in San Antonio, Texas and attended The Woodlands High School in The Woodlands, Texas. He is the son of Craig and Alisann Guthrey. He is the grandson of Luann Hunt and Lamar Hunt ’54 and the nephew of Jim Hanna ’54 and David Lund ’94. David is currently serving as Sergeant Major of the Corps for the 2013 – 2014 school year.

Within the Corps of Cadets, David was originally a member of Squadron 17, is currently the highest ranking junior in the Corps, and is also a member of the Ross Volunteer Company.

Outside the Corps, David is the Executive of Operations for The Big Event and has focused his efforts on serving Texas A&M in several student organizations. In his freshman year he was a member of the Freshman Leadership Organization known as PREP (Progressively Reaching Excellence in Professionalism), the David Gilbert Leadership Conference, The Big Event Committee and served as an Aggie Muster Host. In his sophomore year, David was a member of The Big Event Committee where he received the award for Most Outstanding Committee Member of the Year and served the Mays Business School as a Freshman Business Initiative Peer Leader where he received the award for Peer Leader of the Year. He also attended the Abbott Family Leadership Conference and returned to serve as an Aggie Muster Host for a second year.

During the summer of 2013, David worked for USAA as a financial analyst intern in the department of the Chief Financial Officer in San Antonio, Texas. He plans to continue to serve Texas A&M student organizations actively until he graduates in May 2015, and then hopes to pursue a career in the energy industry.

David is a natural leader who is always ready and willing to lead from the front and take on added responsibility when its needed. He is a well-rounded, exuberant young man who serves his university and Corps with a positive attitude and a sound attention to detail. He has proven himself in both educational and professional settings, and he has made a positive impact in virtually every organization to which he has belonged. I have no doubt that David is going to continue to make a huge difference in the Corps, and also in the energy sector upon graduation. I’m very proud of David and his accomplishments and look forward to seeing him go on to great success upon graduation.