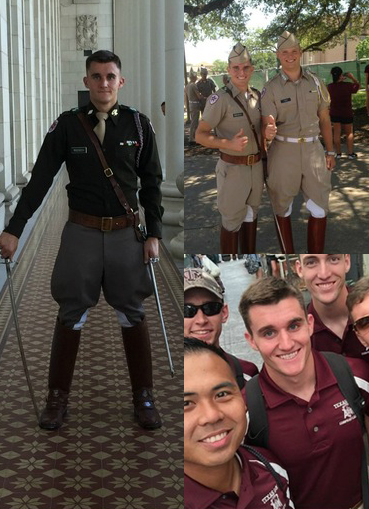 David Roensch ’17 is a Finance major from Collinsville, Oklahoma. He is the youngest son of David and Mary Kay Roensch.

David is currently serving as the Commanding Officer for Company P-2 after spending his first 3 years in Company C-2. While in C-2, he served as a Fire Team Leader, Squad Leader, and planned his unit’s participation in Aggie Habitat for Humanity’s “Shack-A-Thon” as a sophomore. He participated in the Nichols’ Rising Leader Conference as a sophomore, and the Corps to Corporate Conference as a junior.

Off the quad, David has twice served as an Impact Counselor, participated in Duolos, a freshman bible study group at Grace Anderson Bible Church, and was a member of the Aggieland Biblical Archaeologists, culminating in a trip to Israel with the organization over the summer of 2015. David had the opportunity to travel back to Israel last May as part of our International Excursion Program, serving as the excursion’s Student Leader.

David expects to graduate in December of 2017 and work in the financial management field. David is an exceptional cadet, and an even more exceptional young man. His strong character and leadership abilities will carry him far in life, and I have no doubt that he will be successful in all that he does in the future. David is truly one of our very best!