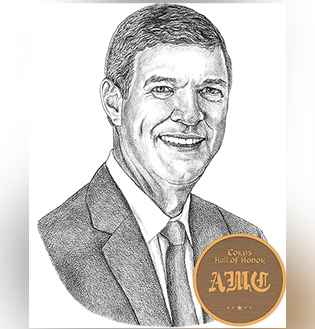 Craig Brown graduated from Texas A&M where he received his bachelor’s degree in civil engineering in 1975 and a Master of Business Administration in accounting in 1977. He was a member of I-2, 6th Battalion Staff, a Ross Volunteer, received the Army ROTC Superior Cadet Award, chosen Outstanding Senior Engineer—College of Engineering (COE), and lettered in track. After graduation, Brown worked for Exxon and Keystone International. In 1986, Brown co-founded and became Chairman of Bray International, today’s largest manufacturer of rotary valves/actuators with operations in over 50 countries. Brown was named 1984 Outstanding Young Houstonian by Houston JCC; 2006 Outstanding Alumnus College of Engineering; and 2012 Outstanding Alumnus Mays Business School. Brown serves on the College of Engineering Advisory Council and Honors Board and on the President’s Board of Visitors. Through the Craig and Galen Brown Foundation, over 250 National Merit Scholars have attended A&M on scholarship—including many leaders in the Corps—representing over 175 engineers and 35 doctors/veterinarians. The Foundation gives scholarships annually to all COE Outstanding Senior Engineer recipients. Brown has been a longtime member of the Texas Aggie Corps of Cadets Association.