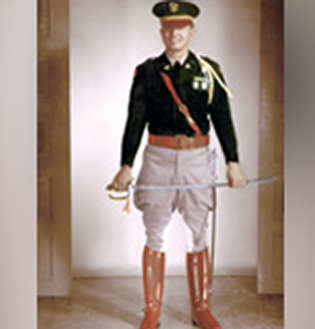 Congressman Greg Laughlin received a degree in History and was commissioned a 2nd Lieutenant in the U.S. Army Reserves. While a cadet, he was a member of the Ross Volunteers and Student Body Vice President.

He graduated from the UT School of Law, the U.S. Army’s Infantry School, and the Signal Intelligence School. After serving a year on the Black Sea of Turkey, Greg served as Commanding Officer of the 202nd ASA Company, 1st Armored Division. Greg served as an Assistant District Attorney in Harris County.

Greg was elected to the U.S. House of Representatives in 1988 and served 4 terms. In Congress, he served on many committees including the Permanent Select Committee on Intelligence. During the Persian Gulf War, he was the only sitting Member of Congress to serve in Desert Storm. He retired as a Colonel in the Army Reserves.

Greg founded the Agriculture and Natural Resources Policy Internship Program in 1990, a program in which A&M students serve on a U.S. Congressional staff. This program has impacted Texas A&M tremendously.