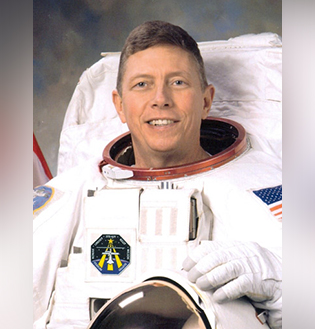 He was commissioned into the Air Force and detailed to NASA-Johnson Space Center to develop early Space Shuttle flight procedures. After completing USAF Test Pilot School in 1985, Fossum served as a Flight Test Engineer and Program Manager at Edwards AFB, CA. In 1992, he resigned from active duty. In 2010, he retired as a Colonel from the United States Air Force Reserves.

At NASA, Colonel Fossum was a systems engineer on several projects before serving the Astronaut Office as Deputy Chief for Space Shuttle. He later worked as Lead Flight Test Engineer on the X-38 test program.

Fossum was selected to begin Astronaut Training in 1998. A veteran of two space shuttle flights, he has logged 636 hours in space, including over 42 hours in 6 spacewalks. He is now preparing to serve as commander of a six-month mission onboard the International Space Station.

During his time at A&M, Fossum was a Commander of Squadron 3 in the Corps of Cadets. A recipient of the Distinguished Eagle Scout award, he has remained very involved in the Boy Scouts, receiving as well the Silver Beaver and Vigil Honor awards. He also currently serves as Scoutmaster. Colonel Fossum was awarded the USAF Meritorious Service Medal with two Oak Leaf Clusters and has been honored as a distinguished Military Graduate from Texas A&M University and a Distinguished Graduate from the USAF Test Pilot School.