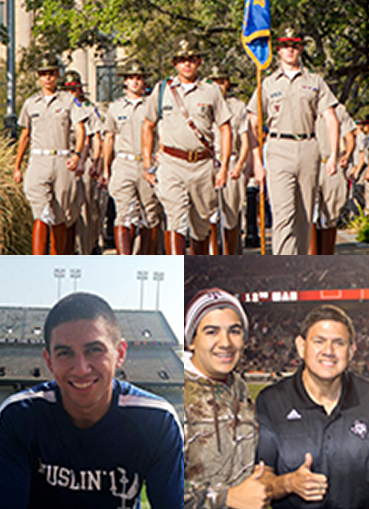 John Ross Palacios ’14 is a Political Science major with a minor in Sports Management from Pharr, Texas, and is the son of Frances and Joe Palacios. John serves as the Commanding Officer for Squadron 1 for the 2013 – 2014 school year.

Active within the Corps, John served as the Squadron 1 Community Service Coordinator his junior year, supervising the performance of just over 3,000 combined total hours by the outfit. He was the founder of the inaugural Blankets for Brazos service project in 2012, a week-long donation drive of blankets, sweaters and monetary donations collected to help citizens of the Bryan-College Station area during the winter months.

Outside the Corps, John is a student assistant for the Texas A&M System Board of Regents and a Package Deliverer/Handler for UPS. He is a member of the Texas A&M Chapter of the International Justice Mission, an organization which raises awareness and money to fight injustices in the world throughout the campus, local churches and community. John also serves as an infantryman in the Texas Army National Guard where he is a member of his Battalion’s Scout Platoon.

After graduation in May 2014, John plans to pursue a Masters Degree in Digital Forensics from Sam Houston State University while preparing for a career in the investigative field of law enforcement. His career goal is to achieve a position in the U.S. ICE (Immigration and Customs Enforcement) Homeland Security Investigations as a criminal investigator assisting in their mission to solve and deter human trafficking and child exploitation.

John is a remarkable young man and an exceptional leader. His involvement in varied organizations and causes is not only admirable, but highly effective. He is a true leader whose initiative drives him to success in his academics and in his duties as Commander of Squadron 1. John has proven during his time in the Corps of Cadets that he is a leader of character who sets the example in all that he does. I’m very proud of John and know that he will go on to great success in the future as a Criminal Investigator. 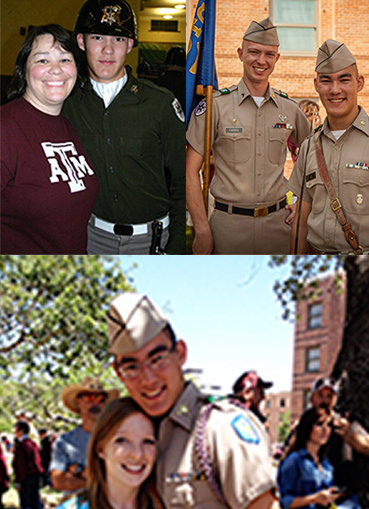 Spencer Le ’14 is a Computer Science major with a minor in Business Administration from New Braunfels, Texas, and is the son of Melisa and Tri Riggs. Spencer serves as the Commanding Officer for Squadron 12 for the 2013 – 2014 school year.

Active within the Corps, Spencer served as the Squadron 12 First Sergeant, was a member of the 2011 National Champion Fish Drill Team, and was named a Distinguished Graduate at U.S. Air Force Field Training in 2012 – given to the top 10% of AFROTC cadets within a flight during a four-week leadership evaluation.

Outside the Corps, Spencer was Valedictorian and a Distinguished Graduate of an Information Assurance Internship with the U.S. Air Force Research Laboratory, Information Directorate, in Rome, New York during the summer of 2013. The internship focused on learning and applying management risks related to the use, processing, storage, and transmission of information or data and the systems and processes used for those purposes.

Spencer plans to commission into the U.S. Air force upon graduation in May 2015. He aspires to work as a cyberspace operator with a focus on network security.

I am very proud of Spencer for his leadership abilities as Commander of Squadron 12, and for his dedication to his studies and his drive towards his goal of becoming an officer in the U.S. Air Force. Spencer has excelled in his training efforts through the Corps and AFROTC, and has expanded his knowledge base both personally and professionally. He is an exceptional role model for his fellow cadets, and I have no doubt that he will go on to great success in the future with the US Air Force. 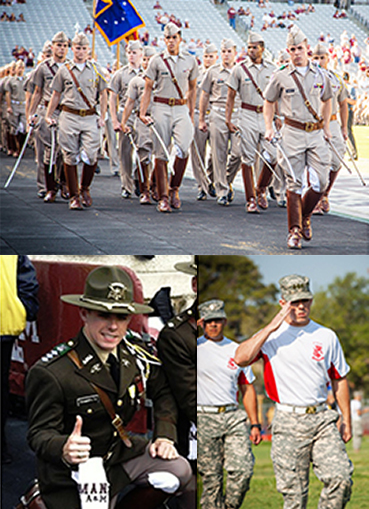 Taylor Rammrath ’14 is a Construction Science major from Sugar Land, Texas, and is the son of Stephanie and Ken Rammrath. Taylor is a first generation Aggie and serves as the 1st Wing Commander for the 2013 – 2014 school year.

Outside the Corps, Taylor is a member of the Texas A&M Associated General Contractors and a founding member of the Construction Science Focused Industry Relations Support Team.

Taylor began his college career at Texas A&M – Galveston before transferring to the main campus and joining the Corps. Although he completed his freshman year at Galveston, he chose to start his Corps career as a freshman to experience his full four years. Facing a tough year as a freshman cadet due to some personal tragedies, Taylor credits the Corps and his fellow cadets – especially his ‘fish buddies’ to helping him overcome adversity and grow into the leader he has become. He proudly serves as not only as a commander, but mentor to his fellow cadets, using his personal perspectives and experiences to inspire others to persevere through the tough times as well as the good to reach their goals in life.

Upon Graduation in May 2014, Taylor plans to commission as a Second Lieutenant in the United States Army after his Leader Development and Assessment Course (LDAC) at Fort Knox, Kentucky. He hopes to become an Army aviator upon graduation form LDAC.

Taylor’s path to the Corps was a bit different than our average cadet, but he found a niche as a leader and has flourished in this role. I admire Taylor’s resolve when faced with adversity and his positive attitude in moving forward with his life. He is known for his positive attitude and his ability to inspire others to strive for success no matter what obstacle may come their way. Mature beyond his years, he has a calm and professional approach to his duties as a Major Unit Commander, and his cadets are fortunate to have his leadership. Taylor is a proven leader and mentor, and I have great confidence in his abilities. He is going to be a superb Army officer, and will no doubt achieve success in the future, no matter what he chooses to do. Taylor truly embodies the traits of “Soldier, Statesman, and Knightly Gentleman” that members of the Corps are known for in every field of endeavor – especially the military. I look forward to seeing him go on to great success in the future. 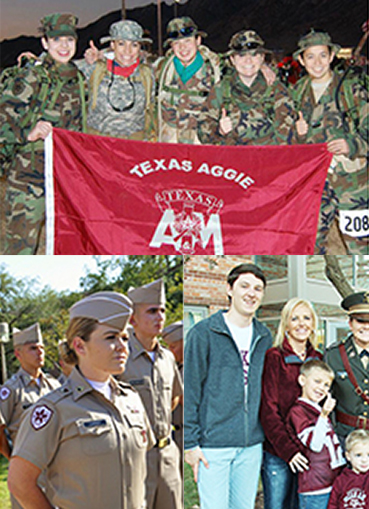 Kayla Carney ’14 is a Leadership Studies major with minors in Communication and Sociology from Allen, Texas. She is the daughter of Kim Sylvester and Paul Carney. Kayla is currently serving as the Executive Officer for Company A-2 and also serves as the S-4 Officer for the Texas A&M Army ROTC Warrior Training Battalion for the 2013-2014 school year.

Kayla was a transfer student from Texas A&M University at Galveston and began her Corps career in Squadron 18. After her semester as a freshmen in Squadron 18, she moved to Company A-2. Currently contracted with the United States Army, Kayla will commission as a Second Lieutenant in May 2014. She plans to serve in the National Guard while pursuing a Law Degree from the newly established Texas A&M School of Law.

A seasoned and accomplished cadet, Kayla holds several leadership positions within the Corps and is clearly recognized for her positive attitude, her confidence, and her innate leadership abilities. She has devoted herself to doing well academically, to maintaining a high level of physical fitness, and to becoming a leader that all want to emulate. I know she will continue her pursuit of excellence in all that she does and will do well in law school. I also have no doubt that Kayla has a very promising career ahead of her in the U.S. Army. Kayla represents the very best of our cadet Corps, and I wish her the best of luck in all her future endeavors. 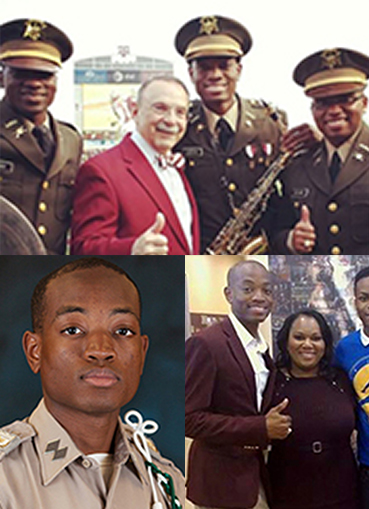 Keltin Jordan ’14 is a Supply Chain Management major within the Mays Business School from Huntsville, Texas, and is the son of Quentin and Brenita Jordan. Keltin serves as the Global Initiatives and Diversity Officer on Corps Staff – the first to fill this new position – for the 2013 – 2014 school year.

Active within the Corps, Keltin is a B-Company Streetfighter in the Aggie Band and plays alto saxophone. He is a member of the Cultural Awareness & Diversity Expansion Team (C.A.D.E.T.) and participated in the Corps Global Initiatives Excursion to China and Taiwan at the end of the 2013 spring semester.

Outside the Corps, Keltin is a member of the Future Former Students Association (FFSA) and Alpha Phi Alpha Fraternity, Inc. and serves as a student worker in the Texas A&M Board of Regents office. He also serves on the executive staff of the Texas A&M MEDALS program, which focuses on issues relevant to underrepresented high school student populations, and informs them about opportunities, available resources and the associated processes for being accepted and funding post-high school education.

Keltin was accepted into the INROADS internship program two years ago, completing two summer internships with Lockheed Martin in Dallas. He was named the 2012 INROADS new intern of the year and the INROADS South Central intern of the year in 2013. Keltin also served as the 2013 INROADS ISA President for the Dallas area, leading a seven-member executive team tasked to strategize and plan summer events for a 175-member intern class This unique experience with Lockheed Martin has led to a full-time offer with their Operations Leadership & Development Program – a two-year rotational program throughout Lockheed Martin business units and upper-level leadership.

Upon Graduation in May 2014, Keltin will work full-time for Lockheed Martin while pursuing his MBA.

Keltin has been a natural leader throughout his time with the Corps and at Texas A&M. He has been a leader in all that he has done in the Corps, and has never hesitated to step-up to a challenge and take on the tough tasks. He has done a remarkable job as our first Global Initiatives and Diversity Officer on Corps Staff, and has been an active participant in our C.A.D.E.T. program and the Aggie Band. His success as an intern with Lockheed Martin is just another testament to his dedication, his education, his leadership capabilities and future potential. Keltin embodies all that we want in a young professional, and I am very proud of all that he has accomplished during his time in the Corps of Cadets. I firmly believe that Keltin is going to make a big impact at Lockheed Martin and will succeed at whatever he chooses to do throughout his life.