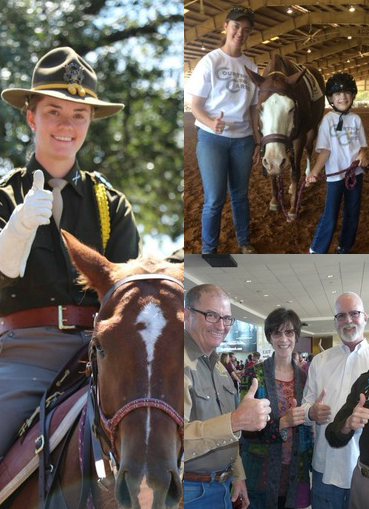 Mattea Much ’17 is an Allied Health major from Durango, Colorado. She is the daughter of Coralee and Mike Much.

Mattea is a member of Company A-2 and is a Platoon Leader and a Scholastics Officer. As a sophomore, Mattea attended the Nichols Rising Leadership Conference. She attended the Corps International Excursion to Mexico during the summer of 2016, which greatly impacted her life. Mattea says, “One of the most memorable experiences of the trip was meeting a family in a rural community who relied on two ponies and handmade equipment to plow their land. By teaching us to plow and allowing us to see their home, their hope was that we would understand how difficult it can be to make a living even when you are doing everything in your power to help your family—and to use this experience to help people in our future careers.”

During her time in the Corps, she has developed a passion for horses through Parsons Mounted Cavalry. Within PMC, she is the Operations Officer and Student Worker. She is also the equine manager for the therapeutic riding program called Courtney Cares. This program provides riding instruction and equine assisted therapy to people with physical or developmental disabilities, as well as instruction for veterans within the community. Mattea is also participating in the LAUNCH Undergrad Research Scholars program this year. This program provides undergraduate students the opportunity to lead their own research project and present a thesis in the spring.

Mattea will graduate in May of 2017 and plans to obtain a Masters and PhD in animal nutrition upon graduation. I have had the opportunity to watch Mattea grow in her time as a cadet. I am excited to see her continued growth as a leader in the years to come. She is an excellent example of the cadets our Corps produces, and I know she will continue to make us proud. 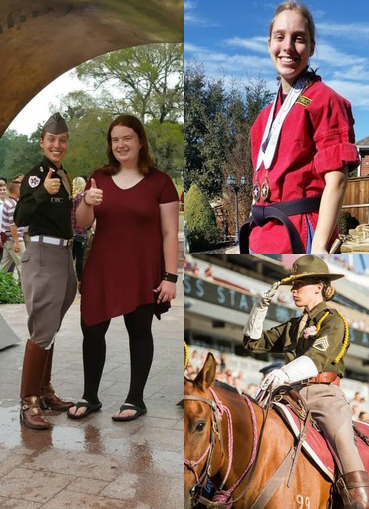 Lindsey Luetge ’17 is a Bioenvironmental Science major from Frisco, Texas. She is the daughter of John (Jack) and Carolyn Luetge.

Lindsey is a member of Parson’s Mounted Cavalry and holds the position as its Mounted Shooting Officer. She is the current Inspector General (IG) Officer for Squadron 4, having previously served as the IG Sergeant and Clerk for the unit. As a sophomore, she was also a member of the 3rd Regiment Color Guard.
Lindsey holds the rank of Honorable 3rd Degree Black Belt in Tae Kwon Do, and is the highest ranked female instructor at the United Martial Arts Academy of Frisco. She has been the Black Belt Weapons Champion in the Texas Amateur Athletics Federation (TAAF) April Winter Games of Texas for the last three years. Lindsey is involved in a variety of on-campus organizations to include the Texas A&M Society for Ecological Restoration, and the Aggie Speleological Society (otherwise known as the caving club). Lindsey has assisted with environmental site assessments in north Texas while interning with a leading Environmental consulting firm.
After graduating in May, Lindsey plans to pursue a career in Environmental consulting, research and restoration within the Texas area. Lindsey is a great cadet and leader, and I look forward to seeing her achieve great things in the future! We are all very proud of her! 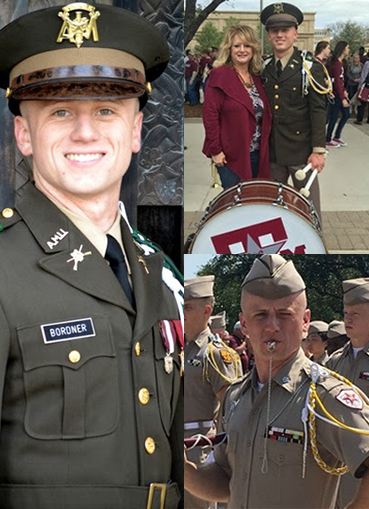 Cole Bordner ’17 is an Industrial Engineering major and Math minor with a certificate in Leadership Studies.  He is from Robinson, TX and is the eldest son of Brock ‘89 and Kelly ’89 Bordner.

Cole serves as the Infantry Band Drum Major for the 2016-2017 academic year, and is a member of Infantry Band Staff.  Originally from A-Company in the Fightin’ Texas Aggie Band, he served as a Fire Team Leader, Guidon Bearer, and Platoon Sergeant within his unit.  In the Band, Cole played the cymbals his sophomore year and the bass drum his junior year, while also serving as a Drum Section Sergeant.

On the quad, Cole is an active member of the O.R. Simpson Honor Society and the Ross Volunteers.  As a member of these organizations he devotes part of his time to tutoring fellow cadets as well as serving the university in a variety of events.

Off the quad, Cole is a member of the Institute of Industrial and Systems Engineers, as well as Alpha Pi Mu, an Industrial and Systems Engineering Honor Society.  In 2013, Cole represented Texas A&M in Washington, DC with other students from the Southeastern Conference to lobby for higher education issues.  Cole has also assisted student government with veterans’ affairs, and has further volunteered with food banks, shelters, and the National Park Service during his time as a student.

Last summer Cole participated in a Corps of Cadets International Excursion to Israel.  Cadets on the excursion learned first-hand about the country’s culture, language, and geopolitical issues.   Cole will graduate in December 2017 and hopes to work as an industrial engineer for a defense company to help contribute to protecting our country.  At some point he plans to return to school to complete a master’s degree in economics. 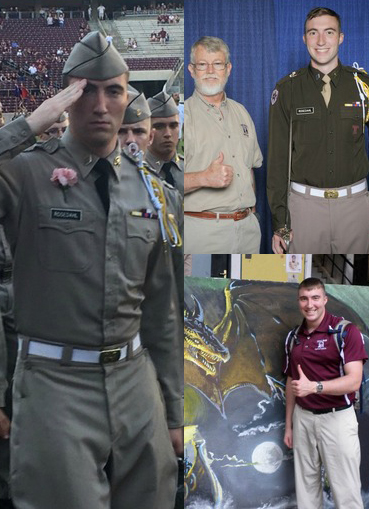 Elias Rosedahl ’17 is a mechanical engineering major from Zumbrota, MN. He is the son of Todd and Jody Rosedahl, and is a first-generation Aggie.

Elias is a member of Company S-2. He has served as a Fire Team Leader and Platoon Sergeant, and is currently the Career Readiness and Recruiting Officer within the unit. In addition to his outfit responsibilities, Elias served as the Corps Athletics Sergeant, and is now serving as the Corps Athletics Officer for the 2016-2017 academic year. Elias played on the Corps Men’s Basketball Team, and was the team’s MVP his freshman year. In addition to athletics, he is a Ross Volunteer and a member of the O.R. Simpson Honor Society. In May of 2015, he participated in a Corps Excursion to Singapore and Indonesia.

During his four years at Texas A&M, Elias has participated in the Nichol’s Rising Leaders Conference, Student Conference on National Affairs, U.S. Army War College’s International Strategic Crisis Negotiation Exercise, and Abbott Family Leadership Conference. He currently serves as a Director of Development for the 2017 Abbott Family Leadership Conference.
Elias has been a Corps Distinguished Student for several semesters, and was named to the Dean’s Honor Roll for his academic accomplishments. In addition to his academic achievements, Elias has interned with IBM as a mechanical design engineer for two years, where he continues to contribute part-time work.

Elias graduates this May and aspires to positively impact the lives of others by sharing the values and lessons he learned as a member of the Corps of Cadets. Professionally, he desires to help shape the future as a design engineer, with aspirations as an entrepreneur. We are all very proud of Elias and all that he accomplished as a member of the Corps of Cadets, and look forward to seeing him go onto even greater success in the future. He is truly one of our very best, and exemplifies the very best that we expect of our cadets. 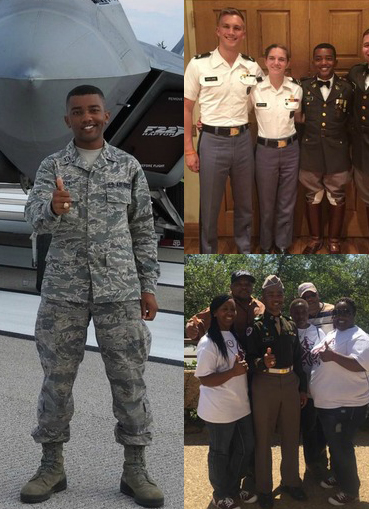 Trenton Dickey ‘17 is an Industrial Distribution major from Porter, Texas. He is the son of Mary and Sergeant First Class Freddy Dickey, US Army (Ret).

Cadet Dickey is a member of Squadron 23. As a sophomore he held the positions of Fire Team Leader and Recruiting Corporal. During his junior year he was a Platoon Sergeant, Recruiting Sergeant, and Public Relations Sergeant for the unit. Dickey is currently Squadron 23’s Executive Officer.

Trenton is a member of the Arnold Air Society as well as an ambassador for the Department of Multicultural Services. He is also a member of the Cultural Awareness and Diversity Expansion Team (C.A.D.E.T.), where he serves as the Operations and Logistics Officer. Cadet Dickey also works for the Prospective Student Center for the Office of Admissions. He has been a member of the African American Student Leadership Institute (AASLI), Distinguished Gentlemen’s Club (DGC), Nichols Rising Leadership Delegate in 2015, a member of the Corps Marathon Team, Darling Recruiting Company, 2016 Corps to Corporate Conference, and he recently attended the 2016 Citizenship Forum at the College of the Ozarks for the Corps.

Trenton graduated from Air Force Field Training in the Summer of 2015. He currently serves as the AFROTC Detachments Public Affairs Officer and as a Flight Commander. Cadet Dickey will graduate in May of 2017 and commission as a 2nd Lieutenant. “My goal,” Dickey says, “is to become an Aircraft Maintenance Officer and serve our Country to the best of my abilities by ensuring that we have the aircraft needed whenever and wherever.”

Trenton is an outstanding cadet with a love for honor, courage, integrity, discipline, and selfless service. I know he will make us proud in all his future endeavors, especially in the United States Air Force!