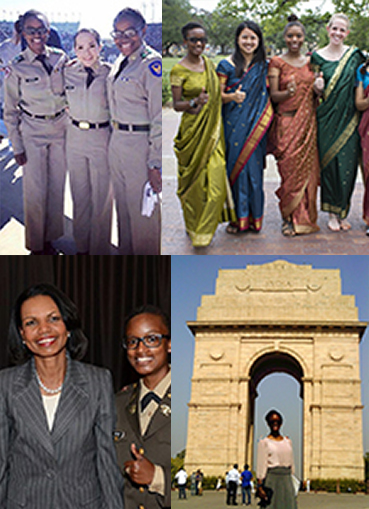 Breanna McKnight ’17 is a Political Science Major from Jonesboro, Georgia, and is the daughter of Paula and Jay McKnight. She is currently serving as the Professional Development Corporal for Squadron 20 for the 2014-2015 school year.

Active within the Corps, Breanna serves as the Director of Community Service in the Corps of Cadets Cultural Awareness and Diversity Expansion Team (C.A.D.E.T), where she received the Gabriel Clark Achievement Award. She is a member of the Summer Recruiting Company and also traveled on the Corps Excursion to India in 2014.

Outside the Corps, Breanna is a member of the Main Programming Sub Committee of the Wiley Lecture Series – a student-led organization that organizes events featuring world-renowned speakers discussing thought-provoking topics of global significance and national and foreign policy issues. She is also a Posse Foundation Scholarship Recipient, an organization providing comprehensive and renowned college access and youth leadership development programs in the United States.

Upon Graduation in May 2017, Breanna plans to go to law school and later become a Judge Advocate General for the U.S. Air Force.

Even though she is only a sophomore, Breanna has already accomplished a lot both in the Corps and the University. She is a scholar, a leader, and a role model for other cadets, and I have no doubt she will continue to excel and build on her leadership roles. She is an exceptional young lady, and has proven that she can handle multiple responsibilities in a wide variety of areas and do very well. I have very high expectations for Breanna, and look forward to seeing her achieve her goals of attending Law School and become an Air Force JAG Officer in the future.