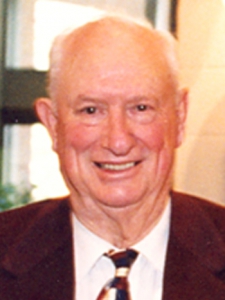 Graduating with a bachelor of science degree in petroleum engineering, Mr. Bernard C. Richardson served as an Army first lieutenant in Europe. During World War II, he saw action in seven campaigns across North Africa, Sicily, Italy and Southern France. He earned the Bronze Star during this participation.

After the war, Mr. Richardson became an automobile parts dealer in Madisonville. He eventually became a leading automobile dealer in Houston. He served as director for several insurance companies. He was active in community, professional, and alumni associations, including the Houston and Bellaire Chamber of Commerce, and the Tallowood Baptist Church. He served as president of the Houston A&M Club. Throughout his career, Mr. Richardson has been a staunch supporter of Texas A&M and its programs.