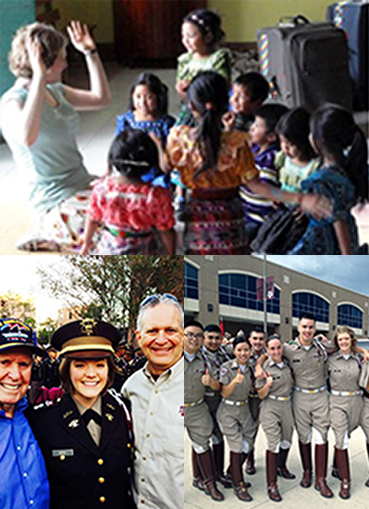 Ashley Riggs ’14 is a Curriculum and Instruction graduate student from San Antonio, Texas, and is the daughter of Leslyn and Mike Riggs. Ashley is a member of Squadron 20 and serves as the Platoon Leader and Professional Development Officer for the 2013 – 2014 school year.

Active within the Corps, Ashley served as Outfit Chaplain her junior year and was also a member of the O.R. Simpson Honor Society. She is the Director for the 2014 Nichols Rising Leaders Conference, a leadership retreat specifically for sophomores in the Corps to equip them with valuable leadership lessons and prepare them to become leaders in the Corps their junior year.

Outside the Corps, Ashley was an usher with MSC OPAS, gave campus tours for prospective students with the Aggie Experience Council, and was an Impact counselor at a Christian orientation camp for Aggie freshmen. She is actively involved at her church, participates in Campus Crusade for Christ events, and enjoys going on mission trips during the summer, most recently to Guatemala in summer 2013. She also co-leads Battle Groups, an organization for Christian cadets based on accountability of and prayer for fellow members. Ashley’s faith is very important to her and she credits her experiences in the Corps with strengthening her relationship with God.

Ashley graduated early in December 2013 with a Bachelor’s Degree in English. She will finish her spring semester as a cadet while starting her Masters Degree program at Texas A&M in Curriculum and Instruction. She aspires to teach high school literature, then return to school to earn her Doctorate and teach collegiate level literature courses.

Ashley has had an exemplary career as a cadet during her time in the Corps. Her mature approach to her studies, Corps responsibilities and her personal life have allowed her to excel in all aspects of college life. To graduate a semester early is not an easy feat at Texas A&M, but she accomplished that and will no doubt go on to excel in her post-graduate studies. I have no doubt that Ashley will become an excellent teacher, and will impact the lives of her students in a very positive manner. She is in every aspect an exceptional role model and representative of what our Corps of Cadets is all about: developing well educated leaders of character. I’m very proud of Ashley and all she has accomplished, and look forward to see her go on to great success in the future.