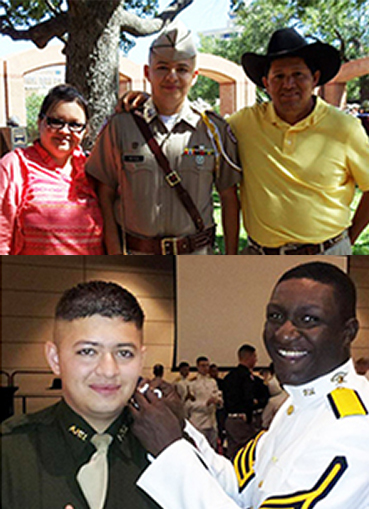 Arquimides Reyes ’14 is an international student from San Miguel, El Salvador majoring in Animal Science with an emphasis in Meat Science and a minor in Agriculture Economics. He is the son of Jose and Bertha Reyes. Arquimides will serve as the Corps Adjutant and Discipline Officer for the Corps of Cadets for the 2013 – 2014 school year.

Outside the Corps, he has participated in the 2012 Fighting Texas Aggies Meat Judging Team travelling and competing against other top ranked universities around the country. Arquimides is a member of the Meat Science Quiz Bowl Team, attended the Reciprocal Meat Science Conference in North Dakota, is involved in Meat Science Undergraduate Research and serves as a volunteer at the Rosenthal Meat Science Center as an assistant slaughterer and meat packager. He also attended a six-week dairy science course in Clovis, New Mexico this past summer.

Upon early graduation in December 2013, Arquimides plans to attend graduate school in the Department of Animal Science at Texas A&M University with aspirations of becoming a professor of Meat Science after serving in the military. He also plans to work internationally with countries that need help implementing food safety regulations.

As an international student with a slightly different perspective on Texas A&M, the Corps, and our nation, Arquimides has been a shining example of the diversity of the Corps of Cadets. He has shown consistent, firm leadership abilities and has excelled in all of his endeavors. His drive to graduate early from Texas A&M also shows his determination for academic success, and I have no doubt that he will excel in his graduate studies and his future career in his chosen field. I am very proud of Arquimides and wish him well in what I’m sure will be a very successful career.