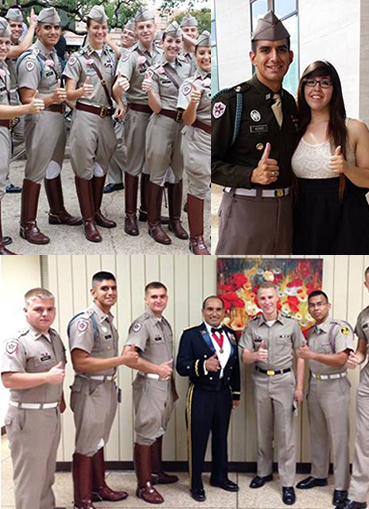 Antonio Ray Alaniz ’15 is a Sport Management Major from Grand Prairie, Texas and is the son of Tina Trapp. He is a member of Company F-1 and currently serving on 3rd Regiment Staff as the Recruiting and Retention Officer for the 2014-2015 school year.

Active within the Corps, Antonio started in the Corps of Cadets in Fall 2011 as a fish in Company D-2, and that Spring joined Company F-1 as part of its re-activation. He enlisted in the National Guard that same Spring and went to Army One Station Unit Training (OSUT) for 11B Infantryman. His sophomore year Antonio served as a Fire Team Leader, the Inspector General Corporal, and the Public Relations Corporal. His junior year he served on 2nd Regiment Staff as the Inspector General Sergeant. As the 3rd Regiment Recruiting Officer, Antonio’s duties include ensuring cadets contact prospective cadets each month, providing cadets for recruiting related events, and ensuring the Regiment has a successful and welcoming Spend the Night with the Corps every week. He is also the Executive Officer for AMC Honor Guard, an organization dedicated to providing funeral and memorial services for former students. Antonio serves on the Aggie Warrior Battalion Staff as a Company Commander, in which he plans, coordinates and executes labs and physical training for MSII Cadets.

Outside of the Corps, he is active in Texas A&M Fraternity and Sorority Life. Antonio is a member of Omega Delta Phi Fraternity, a service and social brotherhood devoted to providing to the surrounding community. He also serves on the Multicultural Greek Council Executive Board as the Director of Personal Development, overseeing the council’s academic, personal, and professional development by putting on workshops and programs.

Upon Graduation in August 2015, Antonio will commission into the United States Army as an Infantry Officer. After his time in the military, he plans to move into the private sector to pursue a career in Sport Operations or Human Relations, specifically in football or baseball.

Antonio is a superb cadet and an outstanding member of Company F-1 and 3rd Regiment Staff. He is focused, intelligent, articulate, and an exceptional role model for others to emulate. He will make an outstanding Army Officer, and will no doubt excel in his role as a leader. Antonio represents the very best of our Corps, and will continue the tradition of proud military service for which Aggies have been known for over 130 years. He is the epitome of a Soldier, Statesman, and Knightly Gentleman.