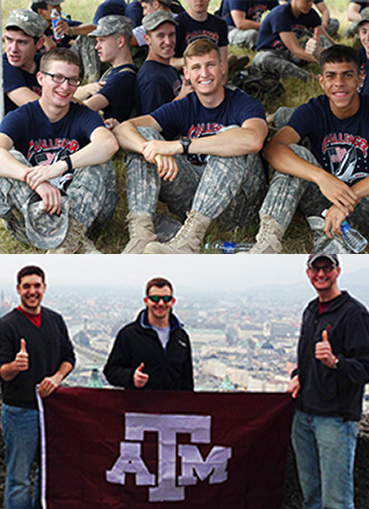 Andrew Abbott ’14 is a Petroleum Engineering major from Katy, Texas, who attended high school in Midland, Texas. The son of Susan ’83 and Preston Abbott ’84, a former Corps Commander, Andrew will serve as the Deputy Corps Commander for the 2013 – 2014 year.

Andrew comes from a long line of Aggies. His father is a former Corps Commander, his mother founded the Texas A&M Tri-Delt sorority, his brother Grant Castleberry was Head Yell Leader in 2007, and his grandparents were once parents of the year.

Outside the Corps, Andrew is a member of the Society of American Military Engineers, the Society of Petroleum Engineers, the Spencer Leadership Conference, Fish Aides and the Aggie Men’s Club. He currently serves as BUILD Command Team Chief Officer – a new campus organization that strives to unify the student body through a physically challenging, large-scale project each year during the fall semester. Andrew also served as a former delegate for the MSC Abbott Family Leadership Conference – which challenges students to examine their personal value system and how they choose to apply it towards their lives, both as leaders at Texas A&M and in their future professional and family relationships.

Andrew has work experience in the petroleum industry as a production tech for BP, a drilling engineer for Newfield Exploration and a reservoir engineer for EOG Resources. After graduation, he plans to work internationally in Europe for a few years with the aspirations of starting his own oil and gas company in Texas.

Andrew has been a driving and positive force within the Corps of Cadets as well as the Texas A&M community. He is a confident, personable young man who I am certain will go on to great success in the future. I am very proud of Andrew and all that he has achieved in the Corps, and what he will no doubt achieve in the future. He clearly represents the very best our Corps has to offer.